Nice to see you again.
I am always happy to tell you a new story I have found.
Only this time  it is not a fortunate one. So be aware if you really would like to hear it.

And especially you, Chloe.
Chloe?

Oh, it seems this time she is not taking part at this session anymore. Maybe it is too boring for a young lady.
So my friends, this means that this time we can change the language. 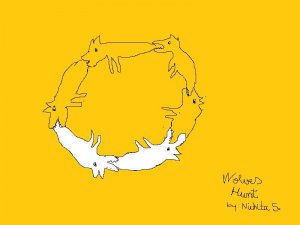 Es war einmal
In einem wunderschönen Land. Nicht weit von hier…
-…Stop?
-Who said this?
-Stop! Do not start without me.
-Chloe? You are back.  You are bit late for our session you know.
But yes, you are a little lady, and ladies are allowed to come late.  Aha
Nevertheless, I am happy to see you.

-I am happy to see you too Sir Klondike. Have I missed something important?
-No, I was just starting with the new story and description of the beautiful country where this tale is coming from.

And where does it come from? Is it far from here? Is it a big country or a small country? Have you been there or just heard about it. Is it one of those countries that have kings and queens or…

Lord, all mighty my darling Chloe, I really like your curious nature but can I begin my first sentence of the story and not be interrupted by a river of questions.

Oh, yes, yes do carry on, sorry about that. I do not know sometimes the words just fly from my mouth and… moreover, I cannot stop them. I will sit here and be quiet …but just a small little question before…

Now there, what was I saying?  …ah yes, and in this country…, which exists somewhere far far from here, was a dark forest. Maybe a magic forest with old strong trees and many never seen animals.

And in this forest lived a wolf. A large and strong wolf.
With a grey fur and dangerous fangs.
With his dark blue eyes, he observed the area he was crossing
Moreover, every other animal he passed by, was afraid and tried to avoid his glance.
They all took a chance for themselves to escape.

My friends. He was not a bad wolf. He was an angry and hungry wolf. With a deep sadness inside his soul. Therefore, he ignored the other animals. However, every time he met a pack of wolves he lied down and spied, wanting to see what they were doing. Of course, the other wolves became aware of this and got nervous. But he was not interested, he did not care.  All he wanted to do is watch.

Sometimes a female wolf was coming closer to him.

As I have told you, this wolf thought of himself to be a good leader of a pack. He thought he could protect them and that he could be a good father. He wanted to give shelter to the pups. Nevertheless, this was not his game. For a short time, he accepted their company but then he shoo them away.

Therefore, he continued to patrol through the forest without any rest.  Eventually he was doing short stops to investigate a pack.

My friends listen the story of what has happened.

I will try to explain you.

Some years ago, the wolf was a leader of his own pack.
He had an alpha female wolf, some pups and a group of other wolves.
He was taking care of the pack and gave them shelter. He was friendly and he liked playing with the pups and his friends. It was a happy time.
Then. One day. Unexpected. A group of young wolves attacked the pack of the wolves.

Without consideration, they launched an aggressive assault. They drove away his friends and kidnapped the female wolves. The younger wolves tried to escape and their destinies are not known anymore. The attackers wanted to kill the wolf. He tried to fight against them but at this time, he was not strong enough. As he became more and more week, his defense ended and he fell to the ground. However, the attackers did not stop. Bites after bites followed. Claws were cutting through his skin. He felt their blood tasting breath invading his nostrils.  It only ended when the attackers thought he was dead. And he was close to dyeing. Lying in his blood, he was waiting for the Great Black Bird to take him away.  But for his surprise and disappointment, this was not the case. The blood flow stopped and very slowly he begun to recover. However, he was never the same as before. His blue eyes turned more and more dark. The color of his fur became gray. He protected his soul with a thick layer of ICE.  His mind was focused now on one single thought:

Therefore, he started with his business. To find the attackers and destroy them.

My Friends.  This is the background of this lone wolf
Yes, I know it is not a romantic Story.  Nevertheless, a Story about life as it is.

Our wolf continued to patrol through the Forest.
One day he smelled the odor of another pack of wolves.
He moved more and more closer to this pack. He laid down and started to spy. Just as usual.
But one detail was different.  He heard a Voice

Irritated he looks around.

„Leave us alone. This is not your family“

Close to him, a young female Wolf was staring and shouting at him.

„You are not welcomed. Leave us alone“

It was not the first time that this happened. but normally by male Wolfs. A short growl  from his gnashing  teeth and sometimes a bite cleared the situation.  But this time it was different…

„ I do not like that you are here. My pack is afraid. My pups are afraid. Go away! “

Slowly He Stands up

„ I don’t care about your pack“

He bared his teeth
But the female Wolf stands still. She doesn’t move one inch back.

„You can fight me if you want. But you will never touch my Family „

Again our wolf was confused. He couldn’t fight a female but he also had to check  for his enemies. Without a solution he decided to retreat. So he leaves.
But on the next early morning he comes back. He was expected…

Yes my Friends. You can imagine

This Young pretty Wolf and the stronger vicious wolf, arguing and struggling.

This game repeats day by day. I think the Wolf already forgot his Mission. And every day both get a little bit closer together.

And then, one day. The hairs ends of their fur are touching. Only by chance.

At this moment both were paralyzed. Forgot to breathe.   A tender flashlight hit their soul and their brain.  Deleted all their responsibilities, their Tasks and  their mission.  Their brain complete empty. As a new Born Child. Their hearts were set on fire. It was as if time started from there it’s very first Beginning.

When the Short longest Moment ended, they went away. Confused and puzzled. From this Time on they met every morning.  Talked to each other.  Shared their Secrets and their Stories. Talked about Future. They were both happy.

And then. On an unforgettable morning they get closer. Not only the furs were touching but their warm bodies.  Lying side by side. Her head on his paw. Enjoying the moment without a sound or a word.

After a while she stands up. Looking at his eyes and to bottom of his Soul
Her Eyes Started to fill up with tears.
It was like the First Time their furs have touched.
No Secret, no shadow, no question marks between both.

He understood everything.
Then she bit. Not very hard. But the bite goes through his fur, his body and his Soul
Another bite followed, harder this time.  He starts to bleed.
But He was not able to move.
He was too tired. He lost every power.

Even she recognized that she seriously hurt him but she didn’t  stop. After a while he started to move slowly and begins to back out.

Covered by his blood he leaves and was never seen again.
She went back to her pack and continued her normal live.

My Friends.  This is the law of the nature. There is no time for romantic or sensitive stories. No time for love or friendship. Only the real life matters.

What happened to the Wolf you ask?

Oh there are some rumors.

One is saying:  As he was serious hit the second time, he could not recover. He found a place in the darkest and coldest side of the wood and died.

Another is saying that he recovered as the first time. Much stronger and darker in his mind. Continued his restless way to find his enemies.

A third one is telling a different story.   He recovered, but a warm feeling stayed in his mind. He found another Wolf without a pack and shared with her the rest of his life.

And the last one. She was waiting for this wolf…

Chloe? you want to say something?
Yes. Are there are also some stories about the female wolf?

First one would be that she continued her life as it was before.

The Second that, yes, she knew what she had done but it had to be done.

But she could not forget. She waited for when there pups were all grown up. At that point the pack got a new leader.

Then she left. She had heard the rumor about the Wolf.  But she had hopped none of them were true.  She’d wished that he was somewhere, waiting for her. And she had tried to find this place.

My Friends…For today it is finished.  I do not know if I can continue. To find new Stories is hard work. And sometimes power is going away.